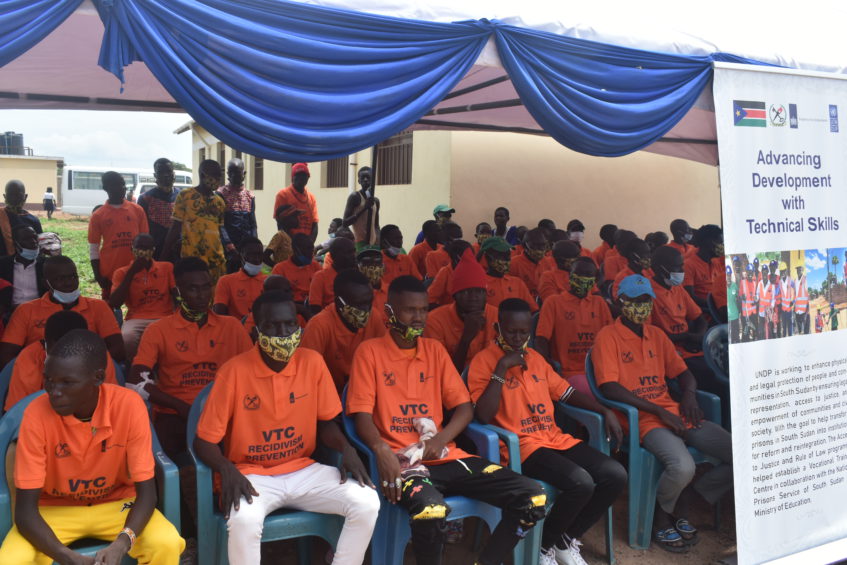 The vocational training was conducted in partnership with UNDP and the Dutch embassy, the state government offered the young prisoners training on farming, tailoring, carpentry, auto-mechanic, electrical, and plumbing.

The project is part of the rehabilitation program for the young offenders in the country.

Speaking to Eye Radio after the graduation ceremony at the weekend, some of the graduates expressed readiness to join the labor market once they are released:

Leleca Dominic Simon, one of the graduates explains how the tailoring course she took has benefited and changed her life.

“I did a tailoring course, this one is important for me because I have kids, so instead of taking their clothes and school uniforms to the tailor, I can do it by myself,” said Leleca.

“I thank these people [UNDP] for this idea. Here, we learnt so many things that we didn’t know before, if there are more courses, we are ready to do it.”

A 17 years old Ramiz Daniel, is one of the juvenile inmates who was recently released from prison after spending 3-year behind bars.

Daniel, who did an auto-mechanic course, told Eye Radio that he benefited a lot from the vocational training.

“I  have done an auto-mechanic course. I didn’t know anything about auto-mechanic skills before, but now I am ready to join the labor market and help my family,” he said.

“When I was outside, I didn’t get help from anyone, even, I kept asking my parents to register me in the school and they delayed until I ended up here.”

“My message to my age mate is the issue of gang groups that have no future. You will end up either in prison or dead. For me, I don’t think I can commit any mistake and come back to prison again, and idling. I want to focus on my future.”

The UNDP Deputy Resident Representative, Christy Ahenkorn, told Eye Radio that the training in the prison shouldn’t be seen as punitive but an opportunity for correction to reformation inmates.

“The training in the prison shouldn’t be seen as punitive but as an opportunity for correction and reformation and transformation,” said The UNDP Deputy Resident Representative.

“The whole idea is transforming prison in a way of changing people’s lives and giving them hope to support the communities.”

This batch of trainees brings the total number of graduates from the vocational training centers in Juba and Wau to over a thousand.

With Product You Purchase

South Sudan was ranked the forth least peaceful country in the world in 2020,

Agwelek refutes claims on build-up of fighters in Upper Nile