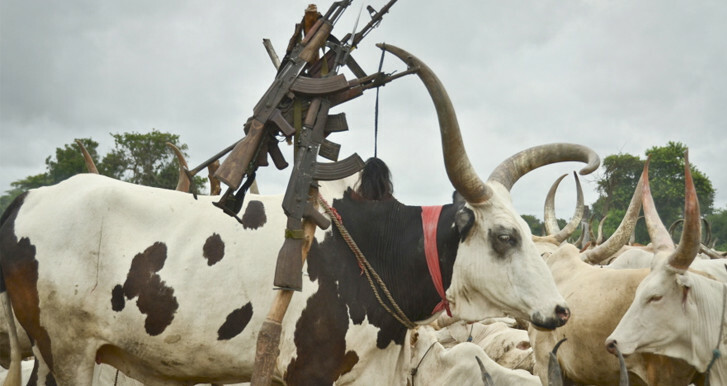 Bull in the middle of cattle Camp .

At least 19 people were killed, thousands displaced and a village burnt to ashes by armed cattle keepers in Lokiliri Payam of South Sudan’s Central Equatoria State this week.

The Archbishop of the Episcopal Church of South Sudan, Central Equatoria Internal province Archbishop Paul Yugusuk who visited the affected area told Radio Tamazuj on Tuesday that the attack on Sunday has devastated the lives and livelihoods of the people in the area.

“They have caused massive destruction, killing of 19 people, raping and looting and destruction of farms continuing up to yesterday (Monday),” Archbishop Yugusuk said. “We have hundreds of families who have sought refuge in Gumbo now while some have gone to Uganda in particularly in Adjumani Refugees camps. The villages have been left empty and one of the villages called Tibure in Kubi has been burnt, 27 houses have been burnt down.”

The prelate said after the government intervened by sending forces on Tuesday to Kubi and Aru Junction bomas, calm has been restored.

However, he said that is a temporary solution.

“We are looking for the exit of the cattle herders completely from the area. This will bring stability, peace and will also make our people go back because this is a rainy season and people have already prepared the ground, they had wanted to plant, and the rain has already started. So we want that the implementation of returning the cattle to their original places should happen,” Archbishop Yugusuk said.

For his part, Rashid Nimir, Lokiliri Deputy Payam administrator, described the attacks as unfortunate adding that the attack was an extension of last week’s Magwi County attack by cattle keepers allegedly from Jonglei state.

He confirmed that many people have been displaced to Juba and Uganda.

“The pastoralists and farmers cannot live in the same place, so we demand an urgent intervention before the situation escalates. The incidents will not be solved by the chiefs or local administrations, this needs intervention from the state or national authorities,” Nimir stressed.

Related Topics:
Up Next

JUBA, 24th September (Office of the President) – His Excellency President Salva Kiir Mayardit on Saturday had encouraged every household farmer to engage in agricultural and other productive activities in order to collectively improve the livelihood of the people.

A statement the President made while on inspection visit to his Rice and Maize plantation farm in Luri.

President Kiir said some of the plantations like Rice and Maize at his farm are ready for harvest.

President Kiir has ventured into farming during some of his free time mostly on Weekends as an example to lead and encourage the people to engage in agricultural activities in order to collectively improve the livelihoods.

The President also appreciated those that responded to his call and are using some of their free time to engage in agriculture and other productive activities, something that he urges every individual South Sudanese to embark on during their free time.

“This is the rice plantation, some plantations ready for harvest. if every household across the Country does this, we would have sufficient food, and we would not be complaining of food shortage and hunger. I encourage every household to do something productive and innovative for themselves.” said President Salva Kiir at his farm in Luri during the inspection today.

Speaking to the Press after the field visit, the Executive Director in the Office of the President Hon. James Deng Wal said the people of South Sudan are blessed with a very fertile land that don’t need fertilisers for productivity.

Wal added that the President is encouraging every household to take up the tools and carry out farming for personal consumption.

More than 60,000 displaced people in parts of Ayod County of Jonglei State are in dire need of humanitarian assistance, local officials said.

Speaking to Radio Tamazuj on Thursday, James Chuol Jiek, Ayod County commissioner, said those families were displaced by floods and recent fighting between armed groups in Fangak and Pigi Counties.

The commissioner pointed out that most of the displaced have been living in the open and without food since arriving in parts of the county a month ago.

The local official called for aid for the displaced.

“A handful of people are absorbed into the local community, but the majority are just in the open. They are really suffering without food and shelter. Also, there are thousands of our returnees who came along with the displaced”, he said.

One displaced person John Gatjuol said they are yet to receive aid after arriving in Ayod in August. He called for humanitarian intervention.

For his part, Maker Ter, the acting Ayod Relief and Rehabilitation Commission coordinator, said the situation is dire.

“The displaced are in need of humanitarian assistance after crossing to our borders. They came on foot without anything because they were fleeing war. We have been engaging our partners but there has been no response. So, we are appealing to our national government and agencies to come and see the situation for themselves,” he added.

US Ambassador to South Sudan Michael J. Adler speaks during the graduation of the unified forces. [Photo courtesy]
Spread news

JUBA – The United States Embassy in Juba on Tuesday issued a statement condemning the killing, yesterday, of a local medical doctor working for the World Health Organization (WHO) in Bentiu, the capital of the oil-rich Unity State.

The killing, officials told Sudans Post, was connected to a sectional feud in which relatives of the slain medical doctor are suspected to have killed a man related to the assailants a few years back.

In the statement obtained by Thejubamirror news Desk and the US embassy condemned the killing and urged the government of South Sudan to do more in protecting humanitarian workers who are delivering much-needed assistance to millions of the country’s citizens.

“Far too many aid workers have been killed in South Sudan. More must be done to protect the workers who deliver valuable and life-saving services to help the South Sudanese people, including the most vulnerable people of this country,” the statement added.

It further called “on the Government of South Sudan to create a safer environment for aid and humanitarian workers, and to bring to justice perpetrators of violence. Nearly 150 aid workers have been killed in South Sudan since 2013.”